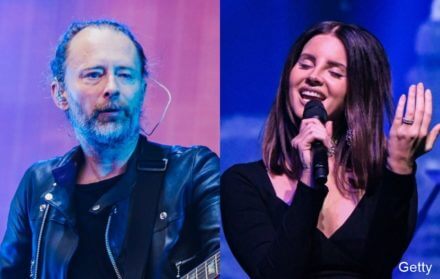 It was a very busy week in music news.

The year’s new releases are starting to role in.

Lana Del Ray says Radiohead is suing her, and then Lana opens about it in a Denver show. Summer tours are being announced, with lots of goodies.

There’s even something for football fans.

The week began with news that Radiohead is suing Lana Del Ray for allegedly copying “Creep” in her Lust For Life song “Get Free.” Then Radiohead denies it.

There’s some irony because Radiohead was sued way back by The Hollies for “Creep” being similar to “The Air That I Breathe.”

Watch Lana talk about it at the Pepsi Center on January 7.

In less stressful news, David Byrne announced a new album, and released a new single in support. The album, American Utopia, is out March 9 and in true Byrne-fashion has a host of collaborators, including Oneohtrix Point Never, Jam City, Doveman, and Sampha.

The single is “Everybody’s Coming To My House”.

Belle and Sebastian also released a new single, from the EP series How To Solve Our Human Problems, out January 19th.

In tour news, James Taylor and Bonnie Raitt announced a tour, which takes them to Fiddler’s Green, May 27.

Chris Robinson announced he was coming to The Aggie for a February 18 show, and he opens up in a Rolling Stone interview.

The Breeders will be coming to the Ogden, April 18. They announced a new album, All Nerve, out March 2.

In other news, a new Outlaw Exhibit is being added to the Country Music Hall of Fame. It opens May 25.

Speaking of Outlaws, many prayers for Willie Nelson, who had to cancel a San Diego show and three others after experiencing breathing issues recently.

We close the week off with two singles that The Colorado Sound premiered this week. One is from a Denver band we think you might have heard of.

And the other from a pretty well known former White Stripe.