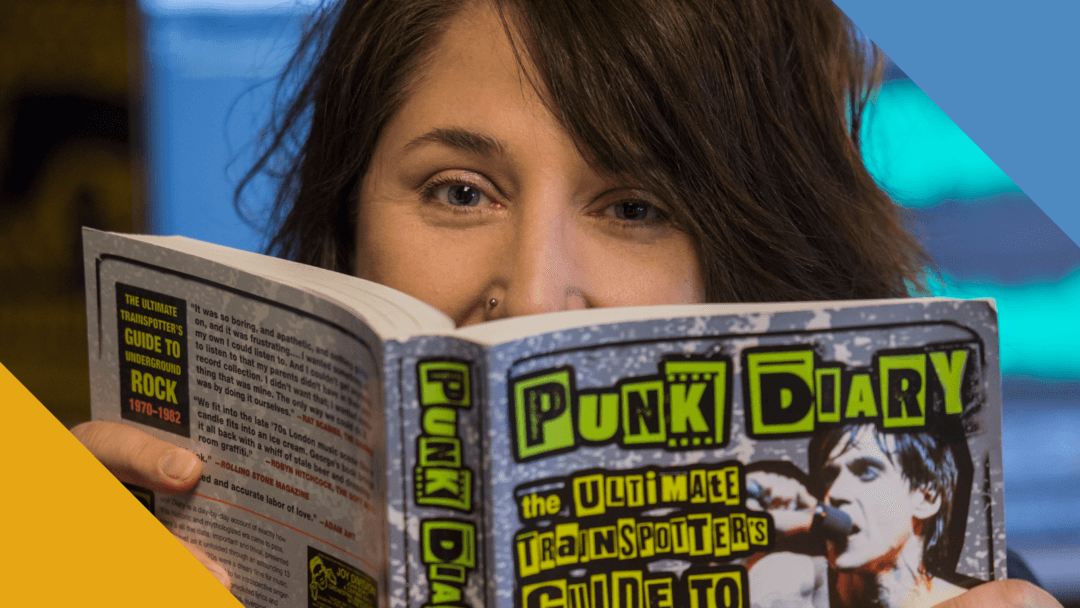 First is the music. I listen to LOTS of music. Of course, there’s my show, every weekday 10-3, and I also research and record my syndicated music history show Music 101. I take my love of music into the community and try to help however I can to facilitate the growth of the Colorado music scene.

Sometimes I sleep. Mostly I drink a lot of coffee!

Until The Colorado Sound, I worked in commercial radio for 25 years and started my own internet station. I love radio in all its forms but working in public radio is a joy. Working with listeners to create great radio is a privilege; one I never forget.

Colorado is night and day from Atlanta, where I made my radio home for over 13 years. I love it here. Colorado is wonderful!

My husband Steven and I live in Fort Collins with our 3 dogs, Wesley, Anya, and Violet. (Occasionally I bring them to work and you’ve probably heard them bark while I was talking on-air.) When we’re not out exploring Colorado with the dogs, I’m usually reading something about history. 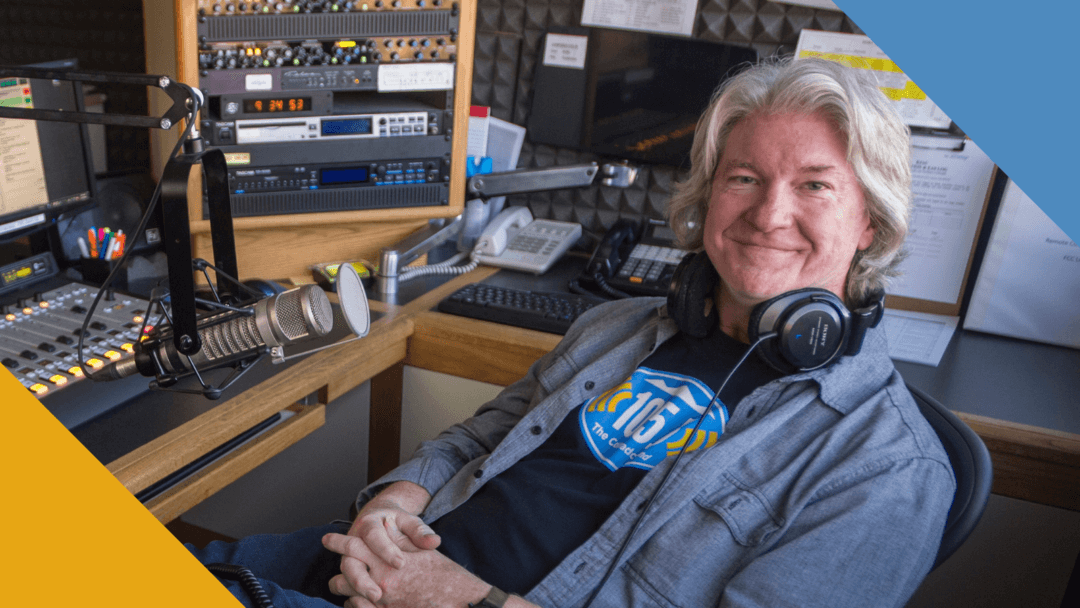 I was lucky when I was 16. I knew I wanted to combine my love of music and live entertainment into a career. Amazingly, I got accepted to the one college where I applied…one with a great radio program.

Working at stations in Massachusetts, Steamboat Springs, and Boulder – along with being the talent booker at eTown, the special event producer/host at the Boulder International Film Festival, and the entertainment director for the BolderBoulder – has steered me to the Colorado Sound. Here I get to be on your radios and speakers, along with making sure we always have tickets and great giveaways for you.

And after being your Morning Guy for six years, you’ll now find me in what I call “the other 7-to-10 o’clock” in your life…at night!

As much as I enjoy playing the music you don’t hear anywhere else, a bigger joy is hearing what the Colorado Sound means to you as a listener. Those emails and social media posts are the best!

If you see me at a show sometime, I hope you’ll say hi. It’s happened not just in Colorado but also in Omaha and Los Angeles!

I’m your companion during your afternoon drive time on the Colorado Sound. I make sure your commute has an awesome soundtrack and a brain teaser with the Time Warp.

I love getting to discover new music with our listeners (and the free snacks are cool, too).

Ninety percent of my adult life has been spent in radio and music in some capacity.

I hail from the Valley of the Sun and though I’m a tried and true mountain girl, I still feel like the desert is home.

Other important facts: hot over cold, spicy over mild, hedgehogs over warthogs, and coconuts in general. I once won a ham at a Phoenix Suns game.

I grew up all over the place because my dad was an airline pilot, including Missouri, Hawaii, and Florida. I went to college at the University of North Florida in Jacksonville thinking I wanted to be a teacher, but I wound up majoring in multimedia production and journalism. I interned at a sports station and an NPR station, and that’s when I knew radio was the career for me.

I worked for iHeart Radio in Jacksonville, Florida, producing an afternoon sports talk show and doing on-air weekend shifts for a rock station. I then got a job offer from Denver sports station the Fan, so I threw everything I could in my car and drove to Colorado. For five years at the Fan I worked with some of the best sports personalities in the business and produced a great morning show.

Music, though, has always been a huge part of my life, so I was ecstatic when the opportunity opened up to host the morning show at the Colorado Sound. This job truly is a dream come true, and I look forward to creating a great relationship with everyone. I wouldn’t be here if it wasn’t for you!

Telling you about me is challenging.  Music and radio are in my blood line.  I’m a third-generation entertainer, going back to my grandfather in the 1920s. All I do, and almost all I’ve ever done has been related to music and radio.

I’ve been working in music and radio in some capacity, in Northern Colorado, since August 1978.  I’ve worked for 1310 KFKA, 99.1 KUAD, 96.1 K-SKY, KIMN, KCSU, KGLL, 107.9 The Bear, and other stations. I’ve also served on the board of directors for KRFC Fort Collins, where I founded the syndicated Colorado music radio show The Colorado Sound in 2006.  In 2016 KJAC picked up that name, and I re-branded my show as Chris K’s Colorado Playlist.  I’ve been with 105.5 The Colorado Sound ever since. My show, the Colorado Playlist, is now heard statewide on over 20 FM frequencies.

Today, my “day job” is all music related – consulting and coaching musicians, booking municipal events, doing sound and stage management for events and festival, and performing as a solo artist or with my band GOATZ!  I’ve performed at nearly every major music venue and festival in NoCO, including Bohemian Nights at New West where I’ve been the Mountain Ave stage emcee since the first year.  I have also taught music business entrepreneurship at the University of Colorado, Denver, in the music industry studies program.

In over 40 years of music and radio in our community, I have dreamed of being involved with a station as community oriented, and musically adventurous as 105.5 The Colorado Sound.  As I look toward what remains of my career, I am ecstatic to have found my home in Northern Colorado radio and music. 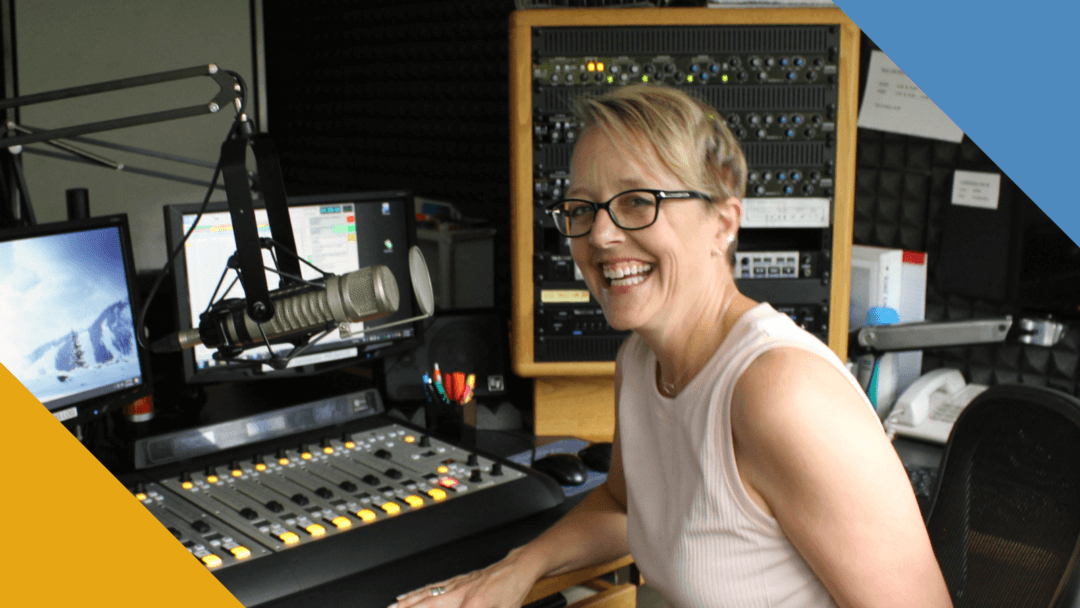 Originally from Michigan, I began my radio career back at WDBM, Michigan State’s student-run FM. I started out in the news department as I was pursuing a journalism degree, but then I heard “The One I Love” by REM. I’ve been a deejay ever since at a variety of stations, mostly in Colorado. My first professional radio gig was at KTCL, back when they were still in Fort Collins. I was both on air and the development director for KRFC, and then I found my way to the Colorado Sound.

I’ve been on the Advisory Board for KUNC for a few years and had recently decided to stop my KRFC radio show, Dawn Can’t Decide. In casual conversation, I asked if there were any openings at the Colorado Sound and the rest, as they say, is history. I’ve been a long-time donor and advocate of commercial-free, public radio. The journalistic integrity of KUNC and the commercial-free playlist of the Colorado Sound are true gifts in our community and there’s nowhere I’d rather be on the air!

I do have a day job that I love as it allows me to stay involved in our great northern Colorado community. I volunteer for Partners Mentoring Youth, the Audio Information Network of Colorado and serve on several boards as well.

When not at the station or at work, you can find me at the gym, out for a run, reading a good book, playing with my dog Nash, or enjoying live music.

I am a musician first and a radio host second and, if you’re doing a music show, isn’t that how it should be?  On the Nine O’clock Blues I play a wide variety of artists from legendary giants, known by virtually everyone, to some obscure footnotes of musical history, sadly forgotten except by me and a few other nutcase diehards.

I started piano at age 6, trumpet at 9, bass guitar at 12 and guitar at 15. A child of the British Invasion, I was first inspired to play professionally by The Yardbirds. Soon after, I discovered The Paul Butterfield Blues Band and have leaned towards Blues ever since.

My pro career started at age 14 and at 15.  After that I played with different bands in a variety of genres, happiest when doing a style that involved a fair amount of improvisation.

In the mid-1980s I started doing music on KUNC.  Since the early 1990s I’ve produced and hosted The Nine O’clock Blues.

The Nine O’clock Blues has been recognized as Music Show of the Year by the Colorado Blues Association.

These days I satisfy my desire to share music through my show and choose to perform my own music only in private because that’s where I don’t have to compromise between being an entertainer or a musician. I can play what I want and that’s the best part of being a musician.

As the Director of Digital Content, I oversee everything digital for the Colorado Sound, including the website, newsletter, and our social media accounts. Which is a great way to bring together my digital background with my passion for music discovery.

Like many music fans, I’ve had a passion for music since childhood. I grew up in Ohio, then got my start in radio during college as host and music director at WMHB in Waterville, Maine. Soon after I veered into music journalism, writing for publications such as the San Francisco Bay Guardian, the San Francisco Chronicle, Spin, Raygun, and alt-country/Americana magazine No Depression. I also wrote The Rough Guide to Country Music, a book tracing the incredible history of the genre across the 20th century.

While living in San Francisco I ran music discovery websites for CNET and CBS Interactive, including Download.com Music and MP3.com. I also led national digital content development for CBS Radio station websites around the country. I’m thrilled to now be in Colorado and working in public media for such an amazing station as the Colorado Sound.

While I spent years digging deep into classic country, I love music in all genres, and I can’t wait to discover my next favorite song.