Lukens is the cofounder of the Song Confessional podcast, where musicians turn anonymous stories into new, original songs. As described on the podcast website, each episode features the “confession” (personal story) that inspired the song, the premiere of the song itself, and an interview with the songwriter. The Song Confessional podcast is hosted by Lukens and Zac Catanzaro and is a collaboration with KUTX in Austin, Texas.

In advance of the free Sept. 18 event at the Mishawaka Amphitheater, we asked Lukens to answer questions about CONFESST!, the Song Confessional podcast, and how audiences have reacted to the experience so far.

Colorado Sound: This is a new event for us in Colorado. Can you tell us, what is CONFESST!?

Walker Lukens: CONFESST! is a bit of a new concept to us at Song Confessional as well. On Sunday, September 18, The Bright Light Social Hour, Walker Lukens (me,) and Esme Patterson will be playing a show at the Mishawaka. Inside of the Mish, we have a permanent confessional booth where people can record themselves telling stories. We, Song Confessional, choose our favorite story and task the bands on the bill with turning that story into a new original song. We release these songs digitally and feature them on our podcast called ( you guessed it) Song Confessional.

CONFESST! is set to happen every fall and spring with entirely different line ups. The confessional booth at The Mishawaka will be open for use any day of the week that The Mishawaka is open for business.

How did you come up with the idea?

We’ve been collecting anonymous stories and asking bands to write songs inspired by them for a couple years. We have never had all the bands who played an event collaborate on a new original song inspired by a confession from the event…until now.

You’ve put on CONFESST! song confessional events at the Newport Folk Festival and South By Southwest. How did you come to choose the Mishawaka as a location for the event?

I’ve been to music venues and festivals all over North America, and yet I have only seen a thousand people without cellphone service dancing their asses off to EDM at 7pm on a Friday at the Mishawaka. You might take it a little bit for granted a if you live nearby, but this place is truly one of a kind! I mean, it’s next to a Wild and Scenic River, and if you paddle to it, you get in for free!!

It usually takes some time for people to understand Song Confessional. But, the Mish’s owner, Dani Grant [a nominee in this year’s Colorado Sound Music Awards], immediately saw how a permanent confessional booth would add to the culture of the venue. We took that as a huge compliment but also recognized that this venue is unlike any other.

Can you share an example of a time when audience members have been truly moved by having their stories turned into a song?

A couple years ago at Newport Folk Festival, a confessor told us the story of losing her fiancé to suicide. Kat Edmonson turned it into an unbelievably moving song called, “Where I Am.” The confessor reached out later to tell us how touched they were by it.

After you’ve listened to the podcast episode, where you can hear the whole confession and the interview with Kat, you understand the lengths Kat went to in order to encapsulate this woman’s grief. We’ve all had the experience of hearing our own lives mirrored in a piece of music. Isn’t that why we like it to some extent ? To know that it’s actually *your* story that’s inspired a song is an order of magnitude greater. 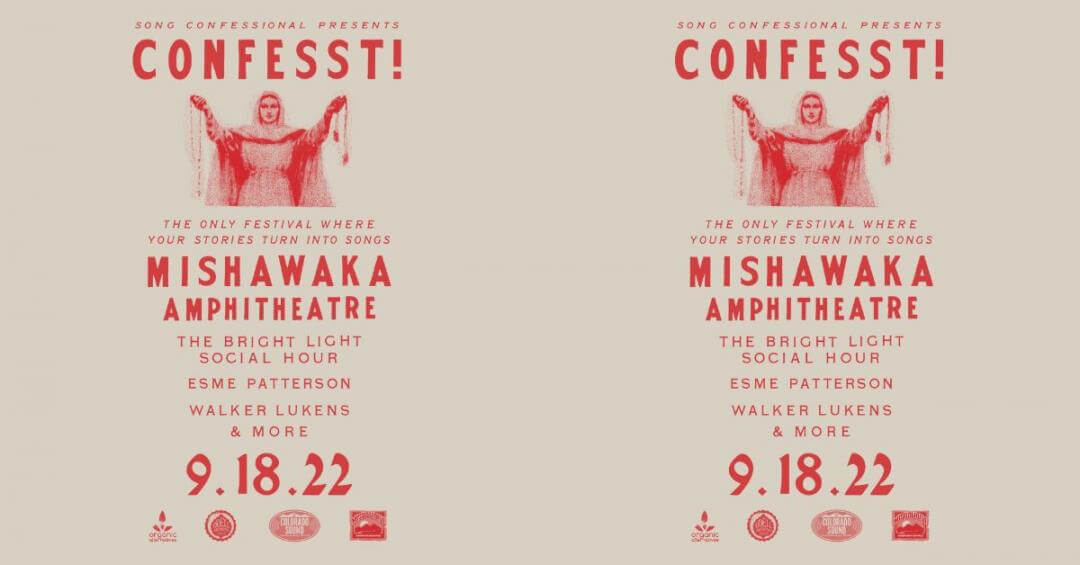 Let’s not forget that CONFESST! is also a concert.

Yes, there will be live music at this event! [Bright Light Social Hour and Esme Patterson are on the bill, along with Lukens.] Seeing music at The Mish is so special. Our hope is that the song, inspired by one of the attendees’ stories, is the ultimate memento from this concert.

And for audience members who don’t submit a story, will they still have a moving experience at CONFESST!?

Getting to hear the confession, the song, and an interview with the songwriter about their process allows some people to connect more deeply with the songs.

Our hope is that having an original song and podcast episode inspired by this event, will make it even more special for everyone who attends.

What does being involved in an event like this mean to you as a musician/artist?

CONFESST! takes place Sunday, Sept. 18 starting at 7pm at the Mishawaka Amphitheater in the Poudre Canyon in Bellevue, Colo. (about 14 miles west of Fort Collins). Entry is free, but parking is extremely limited so shuttle transportation is required. Details on the Mishawaka’s website.

Ever since I found the station, have not listened to anything else!! I love it, was time to support.