The week in music gave us some great new songs, rekindled some old feuds, and had one of a kind collaborations.

New This Week On The Colorado Sound

This week, The Colorado Sound debuted a host of new songs.

Want a new Eels song? A stunner of a John Prine song? Maybe you want to hear Leftover Salmon with some horn-inflected slam grass? How about Titus Andronicus stripping down or LA’s new buzz band The Warbly Jets. We have you covered. Listen here.

Excuse Me If I Break My Own Heart

Ryan Adams gave us a new song for Valentine’s. “Baby I Love You” is pretty twangy, which is really good for the occasion.

He’s going to be at Red Rocks with First Aid Kit on June 14.

In other standout releases from the week, Beach House and Courtney Barnett released new songs on the same day, and Okervill River put out a neat LA song.

Just for fun, check out this. Eddie Vedder, Chad Smith of the Red Hot Chilli Peppers, Will Ferrell, Brandi Carlile and more appeared on stage Monday together. In Seattle, the “supergroup” performed “Personal Jesus” during a charity concert.

Willie Nelson is about to turn 85, so why not release an album to mark the occasion? Last Man Standing will come out April 27. The album features 11 new songs.

Also, Willie Nelson and his Family band have resumed their touring, so good news after health-related show cancellations.

The Parquet Courts have seemingly put up a countdown clock set to expire on February 22. It’s almost certainly an album announcement, as internet sleuths have uncovered. Also, this week it’s been revealed that their upcoming sixth album will be produced by Danger Mouse. A bit of a surprise for the raw-ish Brooklyn band. Danger Mouse’s previous work is with U2, among others.

Quite a story this week in the New York Times, analyzing generational listening habits. It’s a super weekend read, so no need to spoil it all. Just know that 38 year old men love to listen to “Creep” a lot. And kids can’t get into “Creep”. That’s progress, right?

Guess what? The Gallaghers are at it again 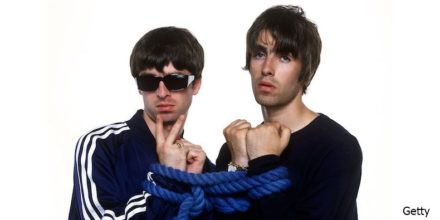 After a bit of a detente, the former Oasis bros are feuding. Again. You can just read it. It’s probably better that way.

In case you have some extra cash, you can now own a Prince song. Really. It’s for sale on eBay from Prince collaborator Chris Moon, who worked with Prince on 1978’s “Soft and Wet”. It’s listed at $490,000.

With Florida on our minds, let’s end the week with an Olympic’s moment to remember – “Imagine”, in four languages.