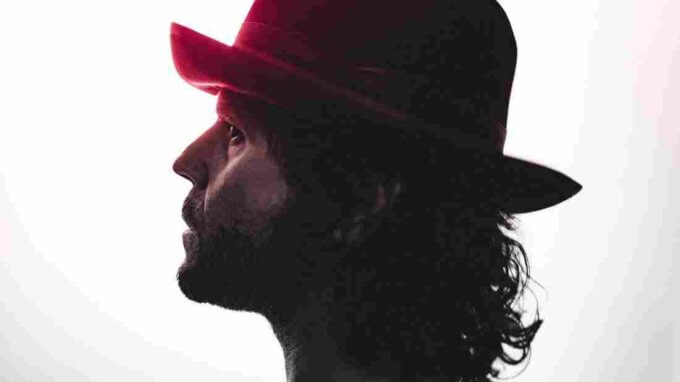 On Strawberry Mansion, Langhorne Slim dives into the aftermath of his struggle with addiction, hometown memories and mental health. Photo: Harvey Robinson/Courtesy of the artist

Langhorne Slim is a singer-songwriter by trade — but for more than a year, he could barely write. Slim recalls only writing about a song and a half, and even then it was nothing presentable to others. He had quit drinking years before, but found himself addicted to prescription pills. “I had been numbing myself … to the source of my own creativity,” Slim says. “Really, to the source of love, you know?” So, Slim went into rehabilitation.

When he got out, it seemed like the world was falling apart: First, a deadly tornado hit his neighborhood in Nashville, Tenn. — then, the pandemic. To his own surprise, however, being forced into isolation was just what he needed. “Something really incredible happened. When there’s so much noise and chaos outside, and to start to feel like I was taking a deep breath again,” Slim says. “To start to recognize myself. To start to smile again! I had, like, lost my ability to smile — my god.”

Once that smile came back, Slim started writing songs again — loads of them, including the 22 on his new album, Strawberry Mansion. “I’ve never written so many songs in such a little amount of time in my life. They just started to come and they didn’t stop,” Slim recalls. “There was no stress on it. So, I could do it, sort of like, childlike. In a way, I could just do it for the love of the music. What a concept.”

Langhorne Slim spoke with NPR’s Mary Louise Kelly about writing through anxiety, melodies of the Philadelphia neighborhood that give the album its name and finding quiet in spite of endless noise. Hear the radio version at the audio link, and read on for an edited transcript.

This interview has been edited for length and clarity.

Mary Louise Kelly: The song on this album, “Morning Prayer,” is about you trying to pray for the first time ever. Was that one of the coping mechanisms you were trying to use?

Langhorne Slim: Yeah. I was attempting to try and discover a more, sort of, ritualistic conscious contact. And a dear friend of mine had sent me a prayer that he reads every morning. It’s beautiful. And I started to wake up and read this thing, but I couldn’t really — the words weren’t jumping off the page, into my heart. And so, putting that into a song definitely helps. Music has definitely been my — the closest to religion that I have ever experienced.

There’s another song on the album that is very raw, and I’d love for you to tell us what it’s about. It’s called “Panic Attack,” and I read it as you wrestling with the dark moment that had come before.

“Panic Attack” is a song about a man who is experiencing a panic attack, written by a man who was experiencing said panic attack. When I got back to Nashville, I started seeing a therapist for the first time. And talking to her about anxiety that sort of manifests into physical freak outs. And she made a suggestion which I resented at the time, which was, “Why don’t you try to play music when you are experiencing this?” And that sounded like a terrible idea to me.

Because in those moments, it’s difficult for me to even move. It’s an awful feeling and the guitar doesn’t appear like my friend from across the room in those times. It’s sort of … giving me, like, a stink eye or something. So, yeah, with like a month or two into the quarantine, I was having a pretty brutal day. And I remembered what she said and picked up the guitar. And that song is just exactly what was going on. So, putting that into a real upbeat tune somehow felt good.


Is it stressful? Is it hard to perform or listen to this song now, now that you’re doing better?

No? It doesn’t take you back to the, like, really difficult moments?

No … That’s a really good question. And I think it’s similar to the songs that one writes, you know, in the depths of heartbreak. When it’s really honest, it feels good to perform. It feels good to sing. It doesn’t make me feel like somebody is breaking up with me in that moment, or that I’m gonna launch back into a panic attack. These things become friends. They kinda look out for you.

I wanted to ask about the name of the album, Strawberry Mansion — which is a neighborhood in Philadelphia, right? Where your family’s from?

Yeah, where my grandpop, Sid, and my grandfather, Jack, grew up. And I think of them as, like, Jewish Buddhas of Philadelphia. They were remarkable men. They were tough guys, but super sweet. And they loved the daylights out of my brother and I. And they would just tell us these great stories about friends of theirs named Curly and Whistle. And I always loved those stories and they stuck with me. My grandfathers are no longer here, in a physical plane. But I carry them with me all the time, and there’s a little instrumental on the record called “Strawberry Mansion.” I was sitting on my couch playing that and, maybe, they were on the couch with me. And they said, “Call this one Strawberry Mansion.” I don’t know, but it just … it seemed crystal clear. So, I’m glad I followed that lead.

You know, this album is — like any album, I suppose — so personal to you. And even for you, specific to a certain moment in your life. Is there a bigger message here? That you’re hoping listeners might get, as we’re all trying to find our own ways through our lives and the pandemic and all of the rest of it?

It’s the message for me, and if anybody connects to it, that would be great. There is endless noise in this world, I think. There’s endless trickery in this world, and fear and divisiveness and negativity. And I am, for myself, not trying to preach to nobody — I’m just trying to pull my own head out of my butt as much as possible and not buy a ticket for every flaming hamster wheel that is offered. For me, it was really finding a little bit of quiet in the noise and a little bit more peace in the chaos. And I think that helped to break something open within me for songs to flow through.

Lots of bands have taken their name from another b

Have a good weekend!

Catching up with one of the best - Laurie Anderson

(from Ron) Sad to hear of Rusty Young's passing th

Whether in person at eTown in Boulder or on the ra

Go inside our #AlbumOfTheWeek with VALDEZ with liv

Listen to this week's Music 101 again, right at ou

Tickets to this one are on sale Friday at 10 a.m.

#Repost / @BlackPumas: Tix go on sale to the gener

Nathaniel Rateliff's performance from the Mercury

Happy Earth Day. There are a lot of great songs we could play to celebrate. Which songs should we add to today's playlist?youtu.be/uxMRgponxD0 ...

I loves me some Marvin! This one resonated with me today, with all the proposed changes to the EPA and other protections for the world we live in at risk, it...