Their new album is Good For You, which Myers says reminded him of the time when the group first started playing together over a decade ago. “[It] felt like being back in that time again, only now everything’s a little more dialed-back and cared-for.”

The Colorado Sound is presenting Houndmouth with Buffalo Nichols at the Aggie Theatre in Fort Collins on Feb. 4. Houndmouth and Nichols also are playing the Gothic Theatre in Englwood, Colo. on Feb. 3. Ahead of these Colorado shows, our own Ron Bostwick interviewed Matthew Myers via email, asking him about their latest album Good for You, what it was like playing late-night shows such as Letterman and Conan, and his favorite memory of playing a show in Colorado.

Below is their conversation.

Ron: Colorado has had a vibrant music scene for a long time.  Some would say you’re from another vibrant music town, Louisville, KY.  But you’re really from just across the river, New Albany, Indiana, which I recently heard you describe as “The Brooklyn of Louisville”.  We know Louisville has given us artists like My Morning Jacket, New Grass Revival, Bonnie Prince Billy, and jazz players like Lionel Hampton and Johnny ‘Hammond’ Smith.  Tell us about the music scene around New Albany and Louisville these days.

Matthew Myers: New Albany 10 years ago didn’t have much. Now there’s a handful of bands and a couple places to play in town. A couple good spots to grab a bite. So, not entirely like Brooklyn to scale, but it’s a start. There’s just something special about it. It is a hidden gem, and some friends are starting to move over here!

Ron: For your latest album, Good for You, you brought in producer Brad Cook. We were intrigued by a description of him we recently read saying, “Brad Cook is your favorite indie band’s secret weapon.” [Want Houndmouth tix & merch? Keep reading…. ] Are you able to disclose anything from his bag-of-tricks you saw down in his underground lair? (“Secret weapon” gives us that James Bond villain feel, so of course he works out of an underground lair, right?)

Matt: Haha, yeah I saw that article, too. It’s funny that our minds go towards evil villain when we hear “secret weapon,” but to my surprise his secret weapon, besides a genius understanding of songs and music and how things are, is the simple fact that he cares about us as people. And the care for the music just follows from there. He removes himself and is also there for you at the same time. He’s not trying to put his stamp on anything, but would rather everyone be the best versions of themselves. There’s space and encouragement to screw up and grow and tap in. 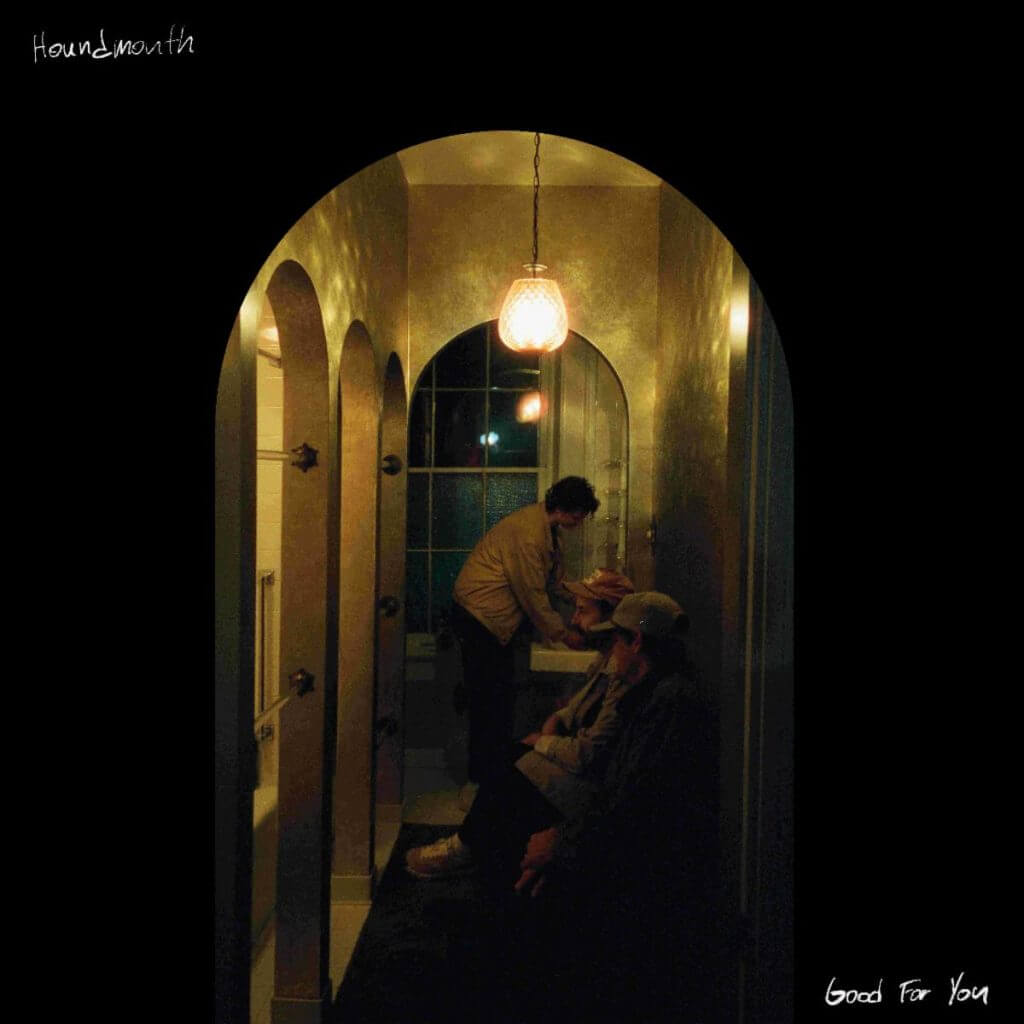 Ron: Let’s go back to your debut album From the Hills Below the City, which got you a lot of immediate attention from The Late Show with David Letterman, Conan O’Brien’s show, the World Cafe, and big-time music festivals around the U.S. Now that you’re a decade past that time, what would you tell your ten-years-younger selves about what to expect from those experiences?

Matt: Doing that kind of stuff is definitely a little nerve-racking, and I remember being pretty sleep deprived for the TV stuff.

Hanging out with Conan and meeting Dave on his last season was pretty special to me. I definitely absorbed those experiences, but if I had to tell myself anything it would be to just trust the fact that I’m prepared and relax haha.

Ron: Here in Colorado, you’ve played everywhere from the intimate Globe Hall and Bluebird Theater to the world-famous Red Rocks.  In early March you’ll be back for a couple shows at the Aggie Theater in Ft. Collins and the Gothic in Denver. [Here you go! Click this link and use the code HOUND AGGIE or HOUND GOTHIC to enter. We’ll draw random winners this Monday, Jan 31!] Do you have a favorite experience/memory of playing here?

Matt: A college kid walked by our van and insisted I shotgun a Truly [hard seltzer] with him outside of [Boulder’s] Fox Theatre. His buddy thought we were a food truck, so we gave him some chips.

Also, when we played Red Rocks last time our monitor rig went kaput three songs into the set. Since then we haven’t used in-ear monitors.

Ron: Listening to the Houndmouth catalog is like playing your version of the board game Ticket to Ride. You’ve got songs that take us to Sedona, Illinois, Las Vegas, and Houston. How are those songs influenced by the travel that comes from doing hundreds of shows in the past ten years?

Matt: Actually most songs came from not traveling and more just romanticizing places. I’ve never written a song about a specific location while I was in that location, haha. Wrote “Sedona” in New Orleans, “Las Vegas” in Texas, Illinois in Kentucky, and “Ohio” in Indiana. When I was a kid I’d get on Wikipedia and go to a random city’s page and write a song. I still do that sometimes when I feel creatively stuck. Even though we’ve done a lot of shows, when I’m touring my “writing” brain is kinda dormant. I’m mostly just trying to like take care of myself, haha.