Get To Know Our Birthday Party Performers! - The Colorado Sound
Skip to content 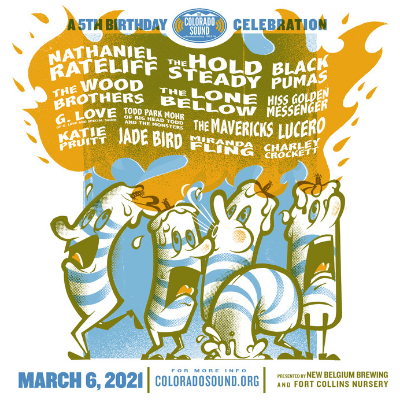 Not only are we celebrating live music, we’re helping to give back! Proceeds from our birthday show will benefit the Colorado Independent Venue Association.

Nathaniel Rateliff is one of the preeminent artists in the country, and we are proud to call him a Coloradan. His award-winning work showcases a unique combination of soul, Americana, and R&B. He has put out sensational solo albums and with his band the Night Sweats. His most recent album, And It’s Still Alright, was a top-10 album in our end-of-year countdown in 2020. Here’s a look behind his hit “Hey Mama.”

Brooklyn band The Hold Steady produce a working-man’s rock, calling to mind Springsteen and Dylan, and are led by Craig Finn, one of the very finest songwriters around. With eight studio albums, including our recent Album of The Week, Open Door Policy, The Hold Steady bring a powerful live show to the stage, and we are honored to have them perform March 6 on ours. Here is the band on World Cafe.

Hiss Golden Messenger is a leading band in the indie-alt-country-Americana scene. Led by the excellent songwriter M.C. Taylor, this North Carolina band has been wildly prolific for over a decade, releasing some of the best sonically constructed albums in that time. Their most recent full-length, Terms Of Surrender, earned a 2021 Grammy nomination for Best Americana album. Here’s more on that album from Wold Cafe.

Memphis’s Lucero specialise in an intoxicating hybrid of swamp soul, cowboy punk, and blues, all with an electric lyricism that has allowed the band to grow one of the most loyal fan bases around, consistently selling out venues from Ryman Auditorium in Nashville to Red Rocks here at home. Their most recent album, When You Found Me, just arrived, and it follows their excellent 2018 album Among The Ghosts. Heavily influenced by stalwarts throughout music, Lucero are one of the most original bands around. Here they are recapping their love of Warren Zevon and more

The Wood Brothers are a celebrated Boulder-bred band specializing in roots music with soul-inflected melodies. Their most recent album Kingdom In My Mind came out in 2020 on Thirty Tigers, and they have released albums on Blue Note as well. Their 2018 album One Drop Of Truth received a Grammy nomination. The band, comprised of brothers Oliver and Chris, are one of the country’s finest acts and are a dynamic live band, selling out Red Rocks regularly, among others. Here is their 2020 World Cafe appearance.

Charley Crockett is a cutting-edge and award-winning blues and Americana artist from San Benito, Texas, who has already released seven acclaimed albums since getting started in 2015. His 2020 album Welcome to Hard Times was one of the best Americana albums of the year, and landed on our end of year list voted on by our listeners. Here he is on World Cafe as well.

Jade Bird is an award-winning songwriter who has become one of most successful musicians working in the Americana vein today. Bird, an English artist, combines Americana with a twist of power punk and smart lyrics. Read her 2018 feature with NPR Music – “All Bets Are On Jade Bird.

The Mavericks are a veteran Latin rock band, with elements of rockabilly and Tex Mex reflecting their diverse approach. A Miami band with three decades of excellent music, The Mavericks released their first album sung entirely in Spanish in 2020 and one of the best of that year. Listen to their World Cafe interview about it and watch an interview with leader Raul Malo below talking with Benji.

Black Pumas is the Grammy-nominated psychedelic soul and blues outfit formed in 2017 in Austin. One of the hottest acts out there today, the group is fronted by the dynamic singer and songwriter Eric Burton. Here is their 2019 World Cafe visit.

G. Love is the leader of Philadelphia’s G. Love & Special Sauce, whose combination of blues, R&B, and swampy soul have been giving us some of the most memorable sounds and songs since the early 90s. Here are several interesting interviews on the great frontman and a performance at Minneapolis’ The Current below.

Big Head Todd and the Monsters

Todd Park Mohr leads the Boulder-based Big Head Todd and the Monsters, one of Colorado’s all-time best bands, and will contribute solo efforts to our show.

The Lone Bellow is a Brooklyn-based band whose 2020 album Half Moon Light garnered acclaim and the band has been called one of the most consistent bands of the past 20 years by American Songwriter. Listen to the band’s most recent World Cafe performance and chat.

Katie Pruitt is a Nashville-based singer songwriter whose debut album, Expectations, was released in 2020 by Rounder Records. Listen to her NPR Music interview on the album.

Miranda Fling is an indie-pop artist out of Fort Collins who won the inaugural Sonic Spotlight that we featured in 2020. You can follow Miranda on Facebook and Instagram.