When you think of America in the 1950’s, likely at some point your mind goes to Doo-Wop. For such short-lived popularity on the charts, Doo-Wop has lived a much more full life in nostalgia.

Doo-Wop originates from the barbershop quartets of the late 19th, early 20th centuries. Barbershop is a very specific style of singing, with its own rules, chord progressions, and vocal blending.

Doo-Wop’s beginnings come from 2 groups who modified the traditional barbershop style and created something uniquely their own.

The other group that paved the way for what we recognize as Doo-Wop were The Mills Brothers. According to the New York Times, “The Mills Brothers’ popularity, versatility and influence were unusual in an era when black performers, like themselves, were segregated from whites. Yet their affability and musicianship made them one of the most influential singing groups in the country, winning admirers like Bing Crosby, Mel Torme and Dean Martin.

With 2,246 recordings made by 1981, their last year performing together, the Mills Brothers may have recorded more songs than anyone else. They have been awarded 36 gold records, for million sellers, and sold more than 50 million records.”

The Mills Brothers popularized simulating the sound of instruments with their voices, adding another element to the evolution of Doo-Wop.

How did we get to Doo-Wop from here?

The Evolution of Doo Wop 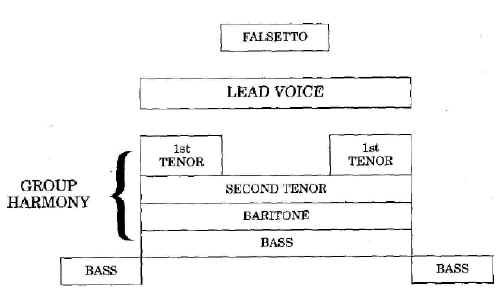 (From The History Of Rock)

In addition, in order for a song to be correctly classified as Doo-Wop, it must contain the following:

Other links of interest:

The Vocal Group Hall Of Fame

Where Did The Name Doo-Wop Come From?