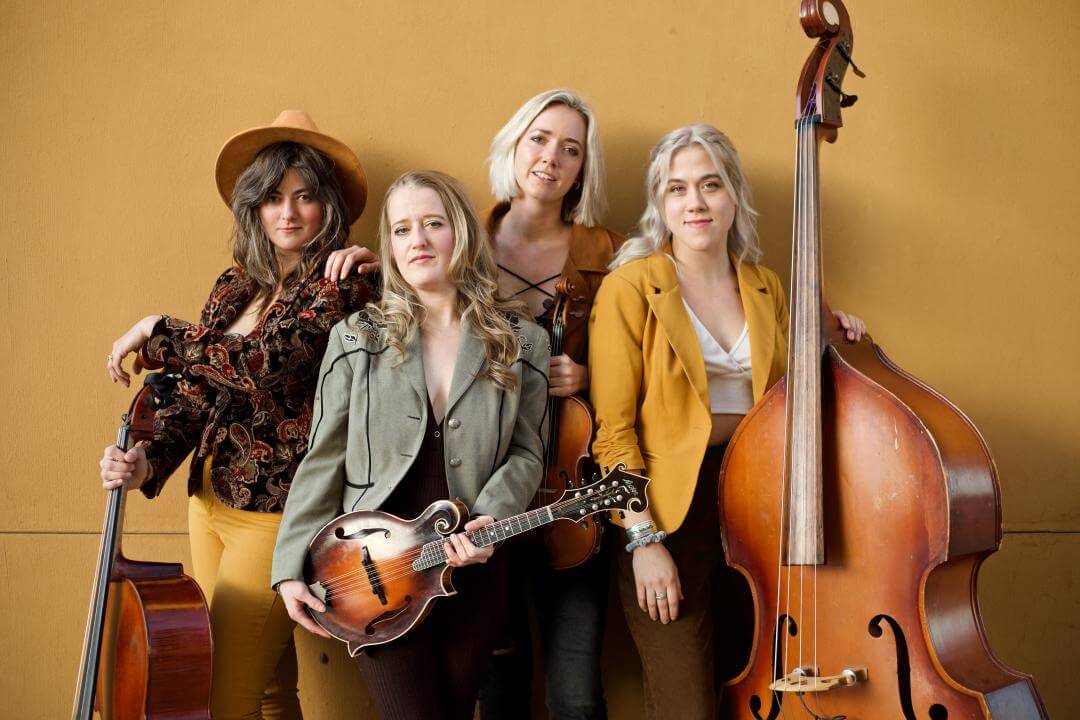 It’s tough to remember a Colorado band playing sought-after slots at Telluride Bluegrass and Rockygrass without releasing an album, but local newcomer Big Richard is different – in many ways. The all-female quarter got together just over a year ago when the organizers of the McAwesome Fest realized their mistake in not booking any female acts and reached out to Lonesome Days fiddler Eve Panning, who helped assemble an all-star cast that picked songs that’d ensure the band and crowd both had ridiculous fun. According to longtime Front Range musician Bonnie Sims, who plays mandolin and sings in Big Richard, the result was a successful attempt to “meet musicality with levity” and turn conservative bluegrass over in its grave.

“I feel like in bluegrass specifically there’s this long-jean-skirts, homeschool-hair vibe and there are other bands breaking that, which I love, and we’re trying to participate in that kind of cultural shakeup of bluegrass, because bluegrass needs it. They fucking need it.”

The members of Big Richard are all well-known Colorado talents, and together they’re like superheroes assembling to fight evil, or at least the status quo. The act’s sets mix energetic, almost punk-rock versions of traditional songs such as “Greasy Coat” with originals and curveball covers of Billie Eilish and more.

“When you unite with multiple powerful forces you’re always going to have more of an impact,” Sims (who is also known for Bonnie and the Clydes, Everybody Loves an Outlaw and the Bonnie and Taylor Sims band) said by phone. “When you get in with three other people who also lead bands and can be the center of a group, the sum is always gonna be greater. I’m super honored and I’ve learned a lot.”

Cellist/vocalist Joy Adams, previously known for playing with Nathaniel Rateliff, and bassist/singer Emma Rose (Whippoorwill, Sound of Honey) round out Big Richard, whose first real Denver headlining show (scheduled for this October) was recently moved from the intimate Bluebird Theater to the much bigger Gothic Theatre because of ticket demand.

“It’s really cool,” Sims says. “It’s fun to see this rabid of a fan response right off the band. These fans are very invested in the humor and the expression of the group, and I feel like we’ve given them a lot to hold on to with that. That’s been really fun to watch and participate in. There’s definitely a lot more to come for Big Richard in the future.”

Sims says she knows, and loves, that nearly anything written or spoken about Big Richard can be a “That’s what she said” joke, and Big Richard winning the Colorado Sound’s “On the Rise” award for 2022 certainly fits that description.

“We’re all about things rising,” she quips. “We love that. Bluegrass has always been super male-dominated, super conservative, overtly religious. We do this ‘Hail Satan’ mic warmup and we’re really just having a good time, trying to poke fun at people who take it too seriously. We’re jumping around having a really good time with it.”

“I feel like women a lot of times on stage get put in a box in terms of what people want to see from women and how people want to view women, so we’re kind of trying to destroy that box and set it on fire with Big Richard and letting ourselves just be totally human. We talk about how we believe that gender is a spectrum, which I do personally believe. I have an angry short dude inside of me. I really appreciate being able to explore that on stage. It’s very interactive with the audience with our banter.”

In the next few weeks, Big Richard will be releasing its Telluride set as a live album, and then this winter a debut studio LP full of originals will follow. As the band begins to tour extensively, winning the Colorado Sound’s “On the Rise” award from listeners means a lot, says Sims.

“We are just radically grateful,” she beams. “We feel so held and championed by this entire Colorado music scene. We’ve really felt like the power of this and we want to see it through as far as it can go. The fans have been a huge cog in that wheel.”