We're Celebrating On March 6 For A Great Cause: Here Are The Birthday Party Announcements So Far - The Colorado Sound
Skip to content 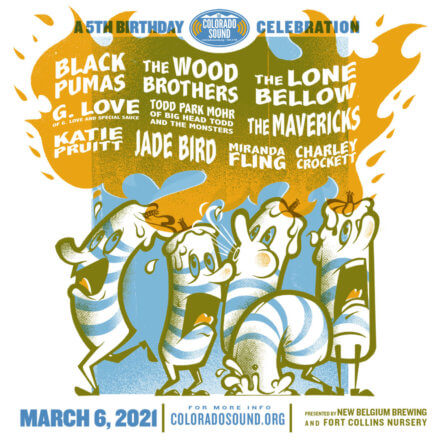 Not only are we celebrating live music, we’re helping to give back! Proceeds from the evening’s show will benefit the Colorado Independent Venue Association.

Miranda is the winner of the inaugural Sonic Spotlight – part of our Music Discovery showcase with the Bohemian Foundation and Fort Collins Museum of Discovery.

Our 5th birthday party is being presented by Fort Collins Nursery and New Belgium Brewing.

The Wood Brothers are a celebrated Boulder-bred band specializing in roots music with soul-inflected melodies. Their most recent album Kingdom In My Mind came out in 2020 on Thirty Tigers, and they have released albums on Blue Note as well. Their 2018 album One Drop Of Truth received a Grammy nomination. The band, comprised of brothers Oliver and Chris, are one of the country’s finest acts and are a dynamic live band, selling out Red Rocks regularly, among others. Here is their 2020 World Cafe appearance.

Charley Crockett is a cutting edge and award-winning blues and Americana artist from San Benito, Texas, who has already released seven acclaimed albums since getting started in 2015. His 2020 album Welcome to Hard Times was one of the best Americana albums of the year, and landed on our end of year list voted on by our listeners. Here he is on World Cafe as well.

Jade Bird is an award-winning songwriter who has become one of most successful musicians working in the Americana vein today. Bird, an English artist, combines Americana with a twist of power punk and smart lyrics. Read her 2018 feature with NPR Music – “All Bets Are On Jade Bird.”

The Mavericks are a veteran Latin rock band, with elements of rockabilly and Tex Mex reflecting their diverse approach. A Miami band with three decades of excellent music, The Mavericks released their first album sung entirely in Spanish in 2020 and one of the best of that year. Listen to their World Cafe interview about it and watch an interview with leader Raul Malo below talking with Benji.

Black Pumas is the Grammy-nominated psychedelic soul and blues outfit formed in 2017 in Austin. One of the hottest acts out there today, the group is fronted by the dynamic singer and songwriter Eric Burton. Here is their 2019 World Cafe visit.

G. Love is the leader of Philadelphia’s G. Love & Special Sauce, whose combination of blues, R&B, and swampy soul have been giving us some of the most memorable sounds and songs since the early 90s. Here are several interesting interviews on the great frontman and a performance at Minneapolis’ The Current below.

Big Head Todd and the Monsters

Todd Park Mohr leads the Boulder-based Big Head Todd and the Monsters, one of Colorado’s all-time best bands, and will contribute solo efforts to our show.

The Lone Bellow is a Brooklyn-based band whose 2020 album Half Moon Light garnered acclaim and the band has been called one of the most consistent bands of the past 20 years by American Songwriter. Listen to the band’s most recent World Cafe performance and chat.

Katie Pruitt is a Nashville-based singer songwriter whose debut album, Expectations, was released in 2020 by Rounder Records. Listen to her NPR Music interview on the album.

Miranda Fling is an indie pop artist out of Fort Collins who won the inaugural Sonic Spotlight that we featured in 2020. You can follow Miranda on Facebook and Instagram.

On Saturday, March 6, our 5th Birthday Party will

Looking forward to this! March 6! Next weekend! Th

Listen to this week's Music 101 on Presidents by g

Live music! Get more info on The Colorado Sound Pr

February is Black History Month, and we compiled g

Anyone listenin from Boulder? Love those Flat Iron

Our March 6 celebration and benefit for CIVA keeps

Margot will explore songs about presidents on this

Lettuce will be playing four shows over the next t

Twenty years ago this month, losing KUNC was defin

Listen to this week's Music 101 again using the st

WOW! We were able to finish our membership drive e

Ready to knock this drive out of the park? We are!

Happy Fat Tuesday! It's always good to have a New

Colorado Concerts Could Get to 80 Percent Capacity by July

On Saturday, March 6, our 5th Birthday Party will take place online to raise money for the Colorado Independent Venue Association and to help bring live music back to the state. Chris Zacher of the National Independent Venue Association and Levitt Pavilion talks about the importance of the project and the impact we can all have when we work together. To contribute before the event, find the link here: buff.ly/3pVW6rO ...