It’s time to move on, time to get going
What lies ahead, I have no way of knowing

First, let us honor the music icons who left us in 2017. On Saturday, Benji and Margot paid their respects in a special Colorado Sound Remembers tribute. The playlist to that show is available below. 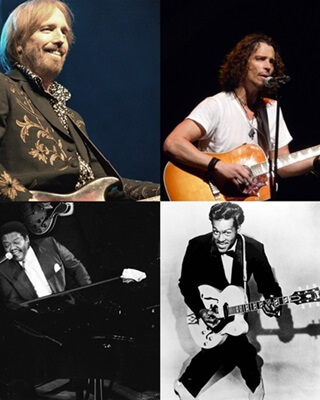 Perhaps the loss of Tom Petty was the hardest to take. He had just played Red Rocks in May. The Heartbreakers sounded great that night, and it appeared more tours were a certainty.

His passing capped off a terribly sad two day news cycle in early October. And yet in a way, it seemed eerily fitting for Petty to be taken from us too. I mean, who wasn’t humming the open refrain of “Wildflowers” or “Into The Great Wide Open,” seeking some greater meaning behind the news?

A Promise To Survive

You wouldn’t be alone if those felt like black days, giving Soundgarden’s “Fell On Black Days” new meaning. Their frontman, Chris Cornell, had died earlier in the year, too.

Cornell told Entertainment Weekly that the song, “is the feeling of waking up one day and realizing you’re not happy with your life. Nothing happened, there was no emergency, no accident, you don’t know what happened. You were happy, and one day you just aren’t, and you have to try to figure that out.”

It’s a sentiment we can all relate.

For a musician, there is no greater legacy than their music; no eulogy more powerful than their own songs.

There’s Chuck Berry setting the world on fire with “Maybellene”, driving riffs like a Cadillac into the American consciousness. There’s Fats Domino’s funk precursor “Walkin'” from 1957. The pastoral “Southern Nights” of Glen Campbell. Walter Becker on “FM” sounding smooth as silk. These are all staples in our American songbook.

And one promise you made
One promise that always remains
No matter the price
A promise to survive
Persevere and thrive.

On behalf of everyone at The Colorado Sound, thank you for all your music.

“And under my feet, baby, the grass is still growing.”